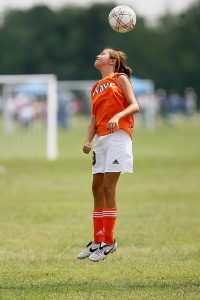 When it comes to brain concussions, women suffer more incidents, have more severe symptoms and are slower to recover than men.

This means while the focus has been on male sports head injuries, research is beginning to come to terms with an actual gender difference when it comes to brain concussions.

When a concussion occurs, it means that the brain endures a rapid shaking within the skull due to a sudden and unexpected movement. This causes bruised or broken blood vessels or nerve damage. Unconsciousness may occur but not necessarily.

Depending on the source of a sudden and unexpected shaking of the brain, it can result in a mild concussion which requires time to heal or a more traumatic brain injury affecting brain functioning from mild to severe damage.

Sports immediately come to mind with the possibilities of being hit in the head by an object or an opponent. At the same time, head bunting a ball is acceptable in soccer and volleyball. Also, women participating in boxing and wrestling are susceptible as well.

The military is quite interested in brain concussions as they see more women incur injuries during training and anticipate it as an issue for women combat soldiers.

Concussions also occur from abusive relationships, as well as, assaults, auto accidents and accidental falls where there is a hard surface blow to the head.

The most common symptoms following a concussion episode are –

These symptoms can continue after an event. It’s always recommended to seek medical attention to monitor symptoms or check for severity of an injury.

Not only was there an increase in concussion incidents, but also symptoms specific to women were observed.

Possible Reasons for a Gender Difference

Among the possible explanations include:

What a Concussion Can Mean for You

If you recognize having any of these gender symptoms, they might be related to a head injury you might not have thought of as being a concussion.

It’s also possible that injury events over time can have a compounding effect. This is especially true if you’ve engaged in athletic events where you have been exposed to on-going concussion conditions. Or, if a recent event has damaged an old injury area.

Awareness is also key if you have daughters or granddaughters who are entering sports at younger ages or deciding to engage in more aggressive sports. It’s important to consider:

The highest concussion rates per sport are –

According to, Marjorie A. Snyder, senior director of research for the Women’s Sports Foundation,

“The federal government must play a role in this national issue, as well. Congress has failed to act on childhood concussions, allowing the much-needed ConTACT Act (Concussion Treatment and Care Tools Act) to languish for six years without a vote into law.  The ConTACT Act calls for the Centers for Disease Control and Prevention to adopt national guidelines for identifying possible concussions in young athletes, and strict rules about when and under what circumstances injured players should participate in practices and games.”

Do you think you’ve ever experienced a concussion?