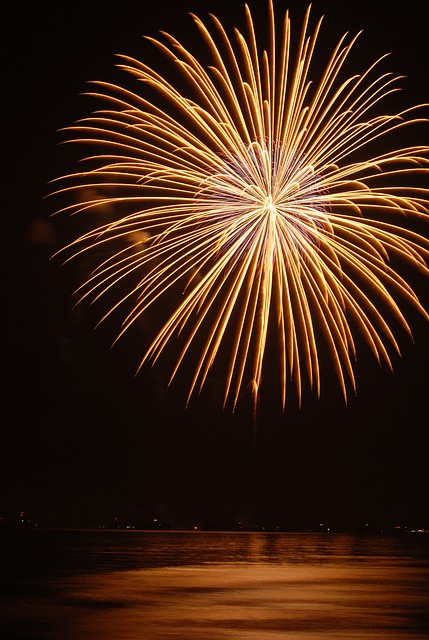 July 4th every year without fail there is a sensory brain assault. There’s red, white and blue everywhere. Rhythmic marching bands passing by, waving flags, colorful parade floats, and the various armed services groups in a parade that seems to stretch for miles. There’s also the opportunity to indulge in an unending supply of hot dogs, hamburgers, icy sodas and ice cream.

The day is not allowed to end until the night sky lights up. It starts out slowly with a star burst and then runs pell-mell into a crescendo of a fireworks extravaganza. It’s not just their beauty and color but the whizzing sound of their trajectory, then a moment of dead silence, then a cacophony of explosive sounds, and finally to be followed by the softer sound of synchronized oohs and ahas.

For those of us who immerse ourselves in every moment of the July 4th festivities, our brains are on pleasure mode. According to Kansas State University psychology researchers fireworks trigger our previous fond memories, especially those from childhood. Also, the overall feel good sensations we experience are due the release of the neurotransmitter dopamine. Dopamine being naturally released by the brain in response to experiences we personally find pleasurable.

Fireworks also play into a brain duality. Fireworks can be stressful in that they are reminiscent of explosions but at the same time the fight/flight stress mechanism is not engaged because the brain recognized the safety of the circumstances.

This form of stress is known as “eustress” where the brain focuses on the pleasure aspects of the experience while be aware of the supposed dangers.

July 4th holds our deeply treasured beliefs in celebrating our independence and honoring veterans for their commitment to freedom.

Ironically, many of these same veterans suffer from Post-Traumatic Stress Disorder (PTSD) where traditional fireworks or even the random cherry bombs can be re-traumatizing.

– Recognized as a treatable psychiatric disorder
– Result of exposure to any traumatizing event
– Sets off conditions of high anxiety, panic and insomnia
– The original event is re-experienced in nightmares or as intrusive flashbacks
– State of hyperarousal where ordinary sights, sounds and smells can trigger an event
– Overly reactive and startling responses occur especially to unexpected sounds
– Negative feelings of self-worth, especially related to guilt and trust issues
– Engage in avoidance behavior to lessen recurrences

PTSD was not recognized as a legitimate psychiatric disorder until 1980. It was well known that soldiers in earlier wars had suffered, but it was thought either as a way to avoid returning to fighting or a temporary consequence of battle. After the recognition of war trauma as PSTD, its definition was extended to include events of violence, abuse, accidents and natural disasters.

There are three significant brain aspects to PTSD

First, during times of high stress, the fight or flight hormone norepinephrine floods the body and brain. Consequently, under highly traumatizing events, the brain becomes less able to logically process information and transfer it into long term memory.

As a result, traumatizing event memories are more easily accessible in response to associated triggers. However, the traumatizing event is more likely to be experienced as re-living the original event rather than a memory of the event.

Second, there are responding physical brain changes. Brain imaging indicates changes in the ability of the amygdala, medial cortex, and hippocampus areas to control over reactions and flashbacks which generate high anxiety and panic.

Third, PTSD may be temporarily delayed when there are conditions of physical brain injury as seen in Mild Traumatic Brain Injury (MTBI) from war experiences. While there are no initial signs of PTSD, it later appears due to accumulated stress since the MTBI event.

Enjoy your fireworks and honor veterans for their service. But understand that not all veterans and others experiencing PTSD can share in the sights and sounds of celebration the same way you do.

What are your favorite July 4th memories?

Why We Love Fireworks: They Put the Brain at the Edge of Fear and Fun

Fireworks – Not Always a Cause For Celebration

Can Fireworks Enhance Your Dreams?