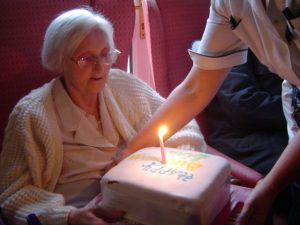 When I was young, I decided that I wanted to live to be 100. I don’t remember the reason why, but when you’re young 100 is a long way off. You also think science will solve all those related aging problems by then.

With each year passing, it seems more likely that becoming 100 is a real possibility. My own mother lived to 93, and a friend’s mother till 101. But, in the back of mind has always been the concern for a loss of independence and mental decline, which science seems to be still working on.

A 2010 population count records over 53,000 centenarians; a sharp increase from 1990. Centenarian women on average outnumber men 4 to 1.

When fifty became the new forty, older women breathed a sigh of relief. Now, we better suck it in and get ready to claim 100 as the new … whatever.

While we don’t know all the factors contributing to this longevity, here’s an example and some insight to consider.

Both are surprised by the milestone, their good health and their independence. Neither sister is certain about the secret to their longevity. Charlotte thinks it’s from drinking milk, while Ann wants to credit genes and a lean body.

However, it’s thought that their ongoing sense of humor, practical jokes of switching husbands and sisterly bickering may also be an important contributor to their longevity and mental alertness.

For Ann the best part and “… the only good thing” is having a sharp mind.

Charlotte, on the other hand, is the standard bearer for “it’s never too late.” At age 78, she took up driving and only stopping at age 99 at the urging of her son who thought a new car would attract highjackers. She gives real meaning to the words “you go girl!”

Even if you don’t think you want to stick around to be 100, take some hints from those who weren’t planning on it either but are still are out there.

Do you have any plans for how you’re going to celebrate your 100th birthday?