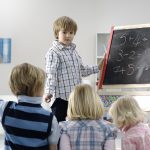 The 1990’s was designated the “decade of the brain.” Since then, there has been substantial research and breakthroughs that have shaped not just how we understand the brain but also how brain science is shaping our lives.

Brain research is still a relatively new field. Sometimes in our haste to understand the research, interpretations may be over simplified. The general public in some instances may be misled to believe things that still require ongoing research before they can be fully substantiated.

One of these concepts is the difference between the functions of the right and left hemispheres of the brain. The left side is generalized as being more analytical, logical, sequential, math and science oriented; while the right side is generalized as being more global, creative, intuitive and music and literature oriented. This division of functioning also has been generalized to the differences in gender – boys being left brain and girls being right brain.

The hemisphere difference and their related gender differences are generalizations but have become defining differences in the media. Extended studies now suggest that differences between male and female brains are less about structural differences and more about environmental, social expectations and shaping.

The promotion of single sex education is an outgrowth of believing gender brain differences to be great enough to warrant separate classes rather than the traditional public educations of equality in the classroom. Along the way, there were research studies where girls appeared to do better in math in classes without boys and boys appeared to perform better and were less distracted in classes without girls.

States that have adopted or are in the process of promoting segregated gender classes are currently being legally challenged by the ACLU (American Civil Liberties Union). The ACLU claims gender segregation promotes gender stereotyping and is based on pseudoscience.

If we support an educational system that separates by gender what do we get?

We get students who lack experience in working with, learning from and building relationships with the opposite sex. They each may graduate with a body of knowledge that is supposed to carry them into an area of employment, military service or college. The employer, the military commander and the college professor all expect their young men and women to be able to work as cohesive team members. You can’t expect students who were gender educated to suddenly become comfortable team members working with their gender counterparts.

But, what of the value that comes from students who do better with their gender classmates? Education has to be flexible, if its students are going to be prepared for the working environment they are about to enter. Schools need to be able to accommodate, as much as possible, the needs of each child and be flexible in supporting learning for students who will benefit from breakout groups. But, the greater part is having schools promote respect for the differences among its students rather than expecting students to reflect gender expectations.

There are lots of other issues that can be raised on this topic. This is not an easy problem to solve, and I would welcome your comments.