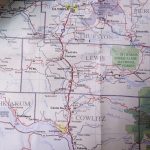 MapQuest, for a time was the big argument in our household. Whenever we had to travel to a location we were not familiar with, my husband would get out his old Rand McNally map book.  And, I mean old.  The wire spiral has opened up, some of the pages are floating around freely and it’s definitely out of date.

During the pre-MapQuest days, the old map usually worked, but when we found ourselves in uncharted territory we meandered around and around. I will say this in defense of men who don’t want to stop and ask for directions – they do have their reasons.

In my case, my husband has a fairly good sense of direction, he often comments on the location of the Sun, and his reason for not stopping at a gas station is that they guys who work there are not from the neighborhood and sometimes not even from the country.  Somehow his male brain’s innate navigation system is able to take all previous know information and coordinate with the last known map location to arrive at our destination.

Wife, that being me, notices that there is the computer program called MapQuest where you enter your departing destination and your arrival destination and click a button.  Magically there is step-by-step directions, total number of miles, approximate driving time and a visual map. Wife thinks husband would appreciate this information.

Question?  Why, when information is readily available to make life easier, do certain men find it difficult to give up their male brain manner of navigation?

Answer: According to Gord Hotchkiss, CEO of Enquiro, the human brain has three ways of navigating. When traveling, landmarks are the easiest because they serve as visual cues that are easily remembered.  They are followed by learning the route to the point of being familiar going back and forth.  And last, comes a cognitive 3-D spatial map based on both landmark and route experience that forms a mental image of the general territory. In general the female brain will use the skills of navigating by landmarks and the male brain will use the skills of navigating from an inner 3-D spatial sense when encountering an unfamiliar environment.

When I heard so many silly reasons why MapQuest couldn’t possibly be better than the old Rand McNally maps, I did the only thing a sensible wife could do.

I printed out the MapQuest directions on my own computer, put it in my handbag and when we got the spot of being confused as to which direction to turn, I would bring out the directions and say, turn right, go ¼ mile, then turn left and it’s on the corner.

MapQuestdirections are now standard for all travel to unknown parts, but my husband still delights when MapQuest is wrong and he can prove his inner spatial sense of directions to be right.

I did propose the idea of getting a GPS system for the dashboard.