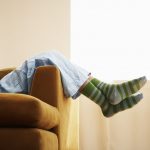 I give you permission to take a brain break – if not today, then as soon as possible.

Why am I giving you permission?  If you are anything like me you are not going to give yourself one. So, I’m authorizing an official brain brake because you need one.

I want you to know how overworked your brain must be.  If you can recall what you just went through today starting from the moment you woke up to right now as you read this, your brain has had to process anywhere from 12,000 to 75,000 thoughts.

No one seems to be able to claim the exact number, and no one has said whether it was the thoughts of men or women.  But, I’m going to suggest that for the female brain it’s going to be 75,000 or more. While your circumstances may be different, your thought numbers will be just as great.  In my case it’s having to keep track of the things my husband can never find (that alone has to be worth another 10,000 thoughts), and that’s separate from the exponential thoughts caused by each child. Any wonder the female brain has so much on its mind.

When it comes to brain capacity, I don’t think size matters.  Even though the female brain averages out at 2.8 pounds and the male brain around 3.0 pounds both are consummate energy consumers. The standard estimate is that 20% of your body’s energy is going to your brain which is approximately 2% your body weight.  That’s a lot of daily brain energy processing.

Whatever your day, you’ve done a lot of brain processing and you may be peaking to the overload side.  That’s when you have to stop.  In case you’re not sure whether you are approaching that point, watch yourself for any stranger than usual responses.

I knew that I was hitting the peaking point when I asked my husband to put the milk away and pointed him in the direction of the stove. I immediately sensed I was in the danger zone.

My response was quick and decisive.  I said “… that’s it, I’m taking a bath; I’ll be out in a couple of hours.”  While soaking, there was an assortment of very strange noises coming from the kitchen, ones which would normally be responded to in crisis alert, but not this time.

I was on a brain break.  Someone else’s brain would have to figure it out.

So, in the spirit and support for your female brain, I give you permission to take your own brain break.