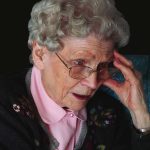 Back in 1986 research scientist, David Snowdon began to investigate a group of Catholic nuns as part of an on-going study on how the aging process is affected by living conditions, health care and economic status. The retired nuns from the convent of the School Sisters of Notre Dame were an ideal group to follow because of the consistency of their lifestyle.

Initially, Snowdon did not find any significant factors contributing to healthy aging until he discovered files containing the autobiographical statements submitted by the sisters prior to entering their religious order.

Comparing these early autobiographic records and later records along with personal interviews assessing their mental skills, Snowdon was able to validate a suggested link between mental skills early in life and quality of health later in life.

Since many of the nuns had been teachers who also acquired master’s degrees, this was significant in confirming other research. Consequently, those with the most education maintain their independence and their mental skills as they continue to age.

Snowdon was urged by other researchers to continue his study and focus on the development of Alzheimer’s. This was again was an ideal aging population since the  increase in developing Alzheimer’s changes from 10% of the general population over age 65 to 50% of the population by age 85.

Not only did the sisters agree to continue their participation but also were willing to allow their brains to be studied after their deaths.

From Snowdon’s on-going research, the following Alzheimer’s patterns have emerged –

However, research into causes is far from simple and so direct.

One key piece of confounding evidence is that a number of sisters who had no indication of mental deterioration prior to their passing, nevertheless, had brain tissue that clearly showed the presence of tangled neural web and plaque associated with Alzheimer’s.

This unique observation was key in dismissing the old myth that brain function was set early on and never changed. In fact it came to be understood that the brain is malleable and many things can be done to maintain its performance over the course of aging.

While this study is on-going as is the analysis of all the accumulated data, Snowdon, prior to his retiring from this project, suggested several factors from his research that seem to “staved off” the symptoms of Alzheimer’s.  He recommends —

As Sister Nicolette said at age 93, “But I thought if science could learn something from this program, then I was glad to be a part of it.”

Science did learn a lot from these female brains and thankfully will continue to do so.